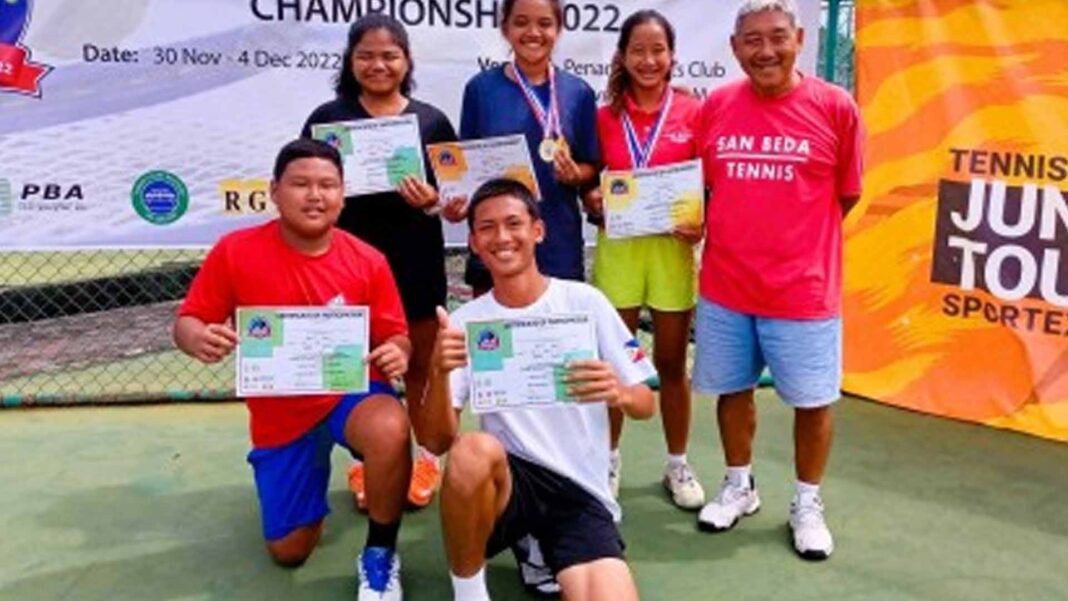 Unseeded in the girls’ 16-under singles category, Madis stunned No. 1 seed Chanya Kai Ning Ng of Singapore, 6-2, 6-1, to claim victory in their title showdown at the Penang Sports Club.

Madis, a native of M’lang town in Cotabato province, teamed up with Basijan to secure the doubles title over Chanya Ng and Sena Sakai of Japan, 6-4, 6-4.

Ashari and Sarawanan eventually took the crown after prevailing over No. 2 seeds Louis Tan (Kedah) and Aqil Adibi (Kuala Lumpur), 6-1, 7-6 (6).

The No. 2 pair of Balakrishan and Haziq Roslani (Kedah) bagged the doubles title over No. 1 seeds Sachin Bala (Selangor) and Timothy Foo (Penang), 6-4, 6-1.

Other doubles champions were Choi Min Geon and Kim Hyun Hak (boys’ 10-under), Kim Ayul and Jan Hyoin (girls’ 10-under), Seo Min Sok and Kim Ji Han (boys’ 12-under), Sia Yeom and Joo Ire (girls’ 12-under), and Catherine Le Liew of Perak and Lynn Lim of Kuala Lumpur (girls’ 14-under).

The Filipino athletes were accompanied by coaches Jovy Mamawal and Merlo Pornobi. (PNA)

The Taipei Economic and Cultural Office eyes on the possible extension of visa-free entry privileges for Philippine passport holders to attract more tourists to their country.
Travel

There is a new place to visit in Baguio as Sagada is bound to open new tourist attractions, such as the crystal-white rock formation.
Spotlight

SM Offices introduced their newest workspaces to offer convenience to employees who strive for success after the pandemic.
The Talk

Skip the hassle of looking for perfect but budget-friendly Valentine's date ideas with these fun activities that you can enjoy with your special someone.
First Dibs

The De La Salle-College of Saint Benilde will open an exhibit that will showcase artworks from known contemporary artists in the Philippines.