After a long three-year wait, “Stranger Things” is finally back and is once again scoring impressive viewership stats for Netflix.

Premiered last Friday, Season 4 volume 1 shatters the record for the biggest-ever opening weekend of an English-language series, taking over Season 2 of “Bridgerton.”

Stranger Things 4 has been running up that hill since Friday, becoming the biggest premiere weekend ever for an English language TV show on Netflix with 286.79 million hours viewed globally!

It also skyrocketed to the 001 spot in 83 countries — another premiere weekend record! pic.twitter.com/2mRiT5XQLT

According to Netflix’s newly released Top 10 rankings, Season 4 of the sci-fi series placed first with almost 287 million hours of views during the week of May 23-29. This comes only three days after the release of the first seven episodes. 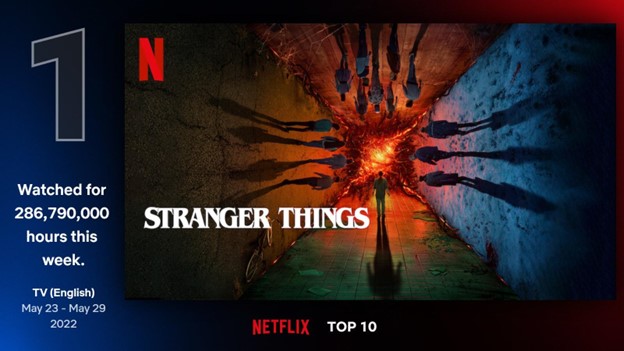 The “Stranger Things” creators, Duffer Brothers, announced earlier this year that due to its “unprecedented length, and to get it to you as soon as possible, Season 4 will be released in two volumes. Volume One has been released on May 27th; Volume Two will be released five weeks later on July 1st.”

It seems that fans also binge-watched the previous installments just in time for “Stranger Things 4,” as all other seasons made it back into Netflix’s Top 5 titles for the week of May 23-29. 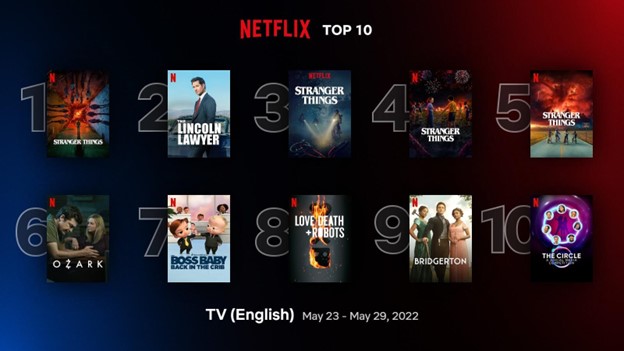 Season 4 of the series topped the second “Bridgerton” story, which was viewed for 193 million hours over its debut weekend during the week of March 21-27.

It was considered a record-breaker for the streaming service at the time, with “Bridgerton” Season 2 becoming the most-watched Netflix English-language TV title in its premiere weekend in Netflix history.

Now, “Stranger Things 4” claims that title and breaks the “Bridgerton” record by nearly half of the total numbers.

With its unique story and diverse set of characters, “Stranger Things” became a flagship series for Netflix immediately upon its debut in 2016.

While there are still new mysteries, new adventures, and new unexpected heroes to be discovered in the story, the Duffer Brothers revealed that this will be the second to the last season of “Stranger Things.”

“It proved too large to tell in four, but—as you’ll soon see for yourselves—we are now hurtling toward our finale. Season 4 will be the penultimate season; season 5 will be the last,” they said.

Part 2 of “Stranger Things” Season 4 will arrive on Netflix on July 1, consisting of two episodes. The series has already been confirmed for a fifth season.