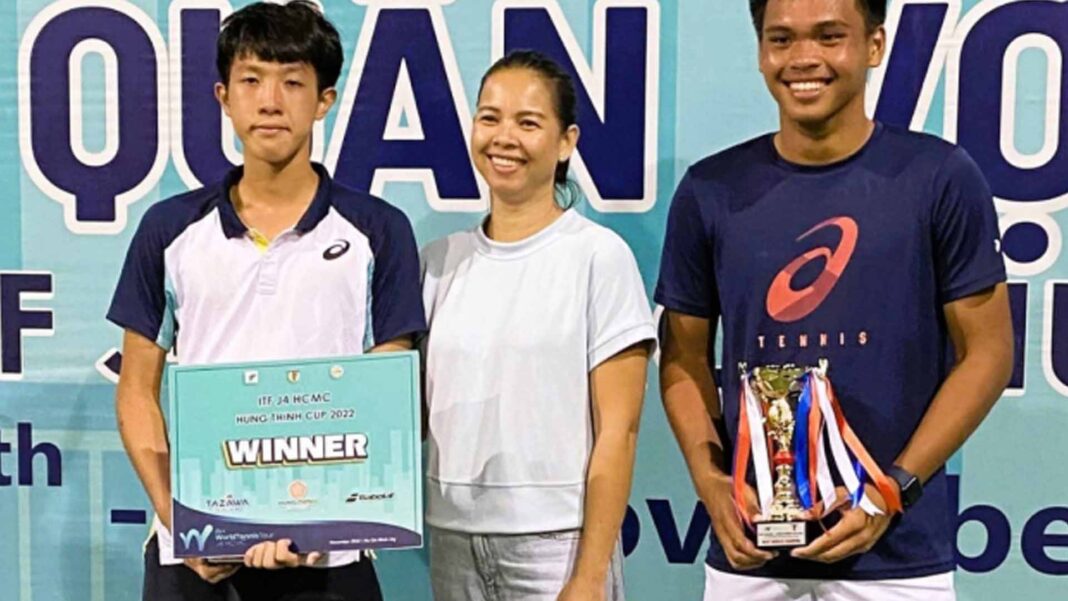 Pascua and Pham walked over Chieh En Hou and Tzu-Cheng Liu in the first round to reach the quarterfinal round where they beat local pair Khang Quoc Thang Huynh and Xuan Duc Le, 5-3, 4-2.

In the semifinal round, they prevailed over Vietnamese tandem Tran Quoc Cuong and Quang Vinh Nguyen, 6-3, 3-6, 10-7.

In the singles category, the second-seeded Pascua settled for a runner-up finish after bowing to No. 7 seed Matthew Johnson of Singapore, 2-6, 6-1, 3-6.

During the first leg last week, the fourth-seeded Pascua made it to the singles semifinal but was ousted by local Vinhheien Truong, 4-6, 4-6.

Truong advanced to the final against compatriot Minh Tuan Dinh Viet, who eventually took the title after winning the match, 6-3, 6-4.

Seeded No. 2 in the doubles category, Pascua and Pham outplayed Carbonilla and Vietnamese Dai Khanh Nguyen, 3-6, 7-5, 10-6, in the first round to arrange a quarter final duel with Ching Chang Chiu of Chinese Taipei and Hyeon Seok Seo of South Korea.

Minh and Vinhhein went on to clinch the title following a 6-2, 7-5 victory over the unseeded pair of Shun-Te Chou and Tzu-Cheng Liu from Chinese Taipei in the championship round.

Shun-Te and Tzu-Cheng marched into the final after eliminating No. 3 seeds Quang Vinh Nguyen of Vietnam and Johnston, 3-6, 6-2, 10-8.

Pascua, 17, hails from Mapandan, Pangasinan while Carbonilla, 16, is a native of Maranding, Lanao del Norte. Both players are training at the Philippine Tennis Academy (PTA) headed by long-time tennis patron Romy Chan.

The team will return to Manila on Monday.

“I see very good potential in both of these boys. I see them as the future of Philippine tennis. I think they have a bright future ahead of them. Hopefully, these ITF outings will pave the way for a college education in the United States, just like the other PTA players (Francis Casey Alcantara, John Bryan Otico, Roxanne Resma, Khim Iglupas, and most recently, Arthur Craig Pantino). This has always been PTA’s goal — to ensure that they have a good education anchored on their tennis talent!” added Toledo, who won the men’s team silver medal with Joseph Lizardo, Bobie Angelo and Camoy Palahang at the 1995 SEA Games in Chiang Mai, Thailand. (PNA)

The Benguet provincial government encourages tourists to visit Atok town for its frost-covered crops that are not present in any other places.
Spotlight

This 2023, start achieving your dream skin with the newest product from Human Nature, perfect for your everyday make-up routine!
Motoring

The Metro Rail Transit Line 3 records its highest number of riders, counting to more than 400,000 since the pandemic.
First Dibs

ArtistSpace opens their first exhibit for this year that features artists from Luzon under “Pugad ni Art Studio.”
Travel

Tourism Secretary Christina Frasco supported the policies and programs under the Marcos administration's development plan following the increase in the tourism sector during the pandemic.