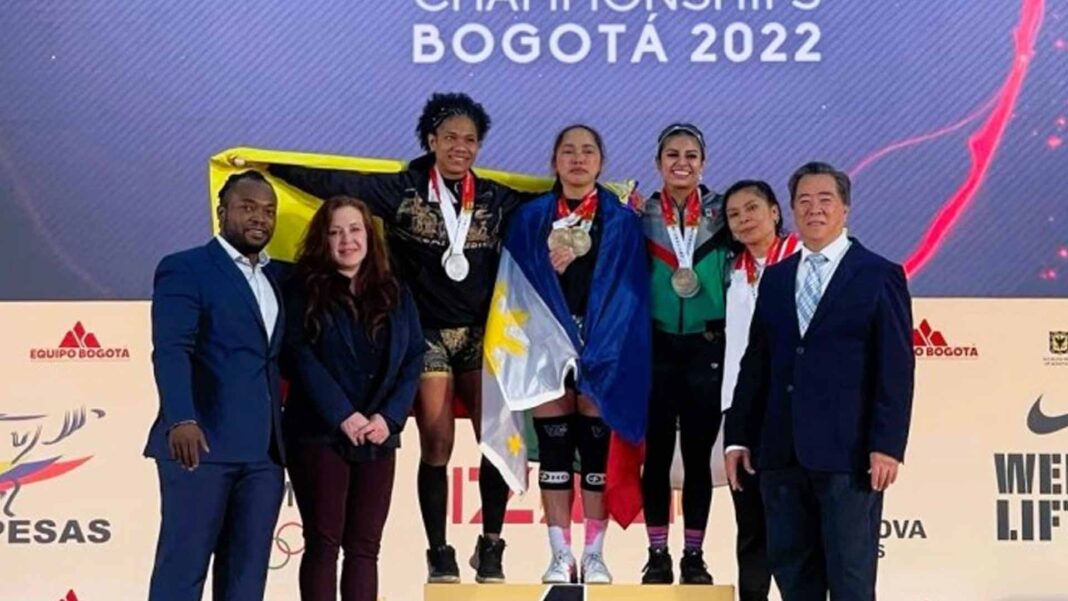 Tokyo Olympics gold medalist Hidilyn Diaz lived up to her billing as the best in the women’s 55-kilogram category after claiming three gold medals at the International Weightlifting Federation (IWF) World Championships in Bogota, Colombia on Thursday.

In the snatch, she successfully lifted 90kg and 93kg but she failed on her third attempt to lift 96kg.

In the clean and jerk, Diaz lifted 114kg in her first try while her next two attempts, 117kg and 121kg, were considered bad lifts.

Colombian Rosalba Estela Morales Del Aguila, 24, had a total lift of 199kg (89kg in snatch and 110kg in clean and jerk) to claim the silver medal.

Mexico’s Ana Gabriela Lopez Ferrer, 28, tallied 198kg (90kg in snatch and 108kg in clean and jerk) to settle for the bronze medal.

“She’s a phenomenal athlete and world champion. She’ll do anything to bring pride and inspiration to the country. No pain no gain. Inspires our country. We have six more lifters trying to qualify for (the) Paris 2024 Olympics. This is just the beginning. Praise the Lord for this blessing. Weightlifting has been doing its job. Let God do the rest,” said Puentevella, who was inducted into the International Weightlifting Federation (IWF) Hall of Fame last June 27.

Under his presidency, the country won its first Olympic medal through Diaz.

“This recent breakthrough of Olympic champion Hidilyn Diaz is proof that Filipinos are strong and talented individuals. We are truly grateful to Team HD for this is a result of hard work … a combination of determination, continuous training and confidence … and she knows that there are people behind her who truly support her,” POC president Abraham “Bambol” Tolentino said.

“Greatness comes when special people congregate and unite for a common goal. With the help of (the) sports community and Hidilyn’s effort, truly her talent is uniquely a force to be reckoned with. We firmly believe that our preparation for the Paris Olympics is timely,” he said.

PSC chairman Jose Emmanuel “Noli” Eala said: “Hidilyn has proven once again that the fire in her heart to be second to none in her field continues to burn and remains the benchmark by which every weightlifter and Filipino athlete must measure themselves against.”

“The PSC will forever be proud of Hidilyn as the epitome of a great champion and will always provide support in her continuing quest to bring honor to our country. Mabuhay!” he added. (PNA)

Get ready to feel the suspense with the newest trailer of Colombia Pictures' sci-fi thriller movie "65."
Travel

The Department of Tourism in the Caraga region recorded a double number of tourist arrivals during 2022 compared to 2021.
Travel

The Benguet provincial government encourages tourists to visit Atok town for its frost-covered crops that are not present in any other places.
Women In The News

The Department of Agriculture in the Davao Region provided cash assistance to a local government to address poverty in four provinces.
Spotlight

Fashion professors and students from De La Salle University recently conceptualized outfits for the little people community as a tribute.